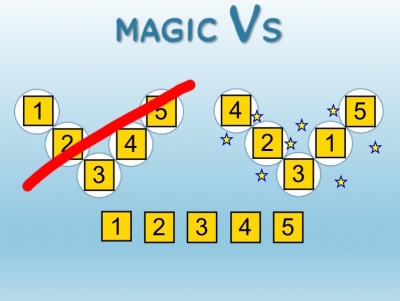 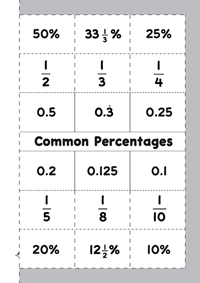 I recently made a Percentages Foldable (common percentages and their fraction and decimal equivalences) to include in our school newsletter. The idea was to encourage students (or parents) to make the foldable and put it on the fridge, or somewhere else prominent, to encourage the remembering of some common percentage comversions.

For my HSC Mathematics General 1 class, we are currently completing the Focus Study FSPe1CEC Water usage and collection.

In this topic, students interpret information, make comparisons, and perform a range of calculations in relation to personal water usage.

This is part 2 of my electronic worksheets for Consumer Arithmetic. Part 2 focuses on Spending Money, in particular: profit and loss, discounts, purchasing, best buys and buying on terms (hire purchase). (Part 1 focused on earning money)

It’s the last day of term here, so teachers might want to spend some time today fixing up their room. So, I brought my Made4Math Monday forward.

I needed some times table posters for my classroom, but the posters you can buy tend to be for younger students and I haven’t seen a grid version (rather than each table listed separately).

Each year I use the TV Show, The Biggest Loser, as an application of percentages – here is a worksheet for 2012 setting out the contestant data that your students can use to perform some calculations.

I’m completing this activity earlier than normal this year, so the data is from earlier in the competition.

Looking around, there are lots of activities for collecting and analysing data using small boxes of Smarties. Here is my version.

Each year I use the TV Show, The Biggest Loser, as an application of percentages.

I like teaching surface area, I think it’s an interesting topic. Yet, I find kids struggle with the concept. Not understanding the basics of area and then getting over the prior knowledge of solids meaning volume are two aspects that cause some difficulty.

This is a great interactive for representing simple inequalities on the number line: Inequalities with GeoGebra.

For Australian teachers with access to objects from The Le@rning Federation, the resource Bridge Builder is a nice way to deal with geometric patterns and finding the algebraic rule.

The end of term/year often brings lots of disruptions. So, as much as I like to keep teaching till the end, some days require something a little different. I like hands-on quasi-mathematical activities that allow every student to engage with and complete. And on Thursday, just before having one of those disrupted days, I found this…

Tomorrow is the last day of term… hurray! Here’s another end of term activity for use with your maths class.

If you’re looking for more number plane drawings, but lean towards AFL, then check out Jeff Trevaskis’ Western Bulldogs Number Plane Logo from his blog, Webmaths. Nice one Jeff!

An excuse to use chocolate in a maths lesson…

The Biggest Loser, the Australian version, is again on television. This year, Year 9 are looking at Percentages at the same time.

There are a couple of previously published resources on this site that might help you out as you prepare for the new school year.

Some of the methods in this article do not work in Microsot Word for Mac 2011. Please see the updated post Mathematical Symbols in Word for Mac for a screencast describing the current best method (in my opinion).

Creating a maths worksheet in Microsoft Word without using the proper symbols does not present well – I’m sure you’ve seen 2 * 2 = 4 or 2 × 2 = 4 rather than 2 × 2 = 4.  My previous post, Maths symbols in Word is one of the most popular on this site.  In that post, I gave shortcuts for inserting mathematical symbols into Word – the post was specific to the Windows version of Word.  As I’ve been a Mac user for a year, it’s time to make a similar post for Mac users.

Understanding the concept of a fraction by shading in a part of a shape is a fairly standard introductory activity.  When I did a search on Flickr for fractions, I found this set of fraction shading diagrams*.  What I liked about these diagrams is that you are required to represent two fractions on one diagram.

This simple design activity could be used as something extra whilst Year 7 are using geometric instruments and learning about perpendicular lines.  Or, as a stand-alone activity.

Building an Angle Wheel is a great way to consolidate an introduction to angles for Year 7.

For many students, working with directed numbers (positive & negative numbers) requires the visual aid of using a number line.

‘The Biggest Loser’, the Australian version, is currently on Channel 10.  Conveniently, it appears on TV the same time we’re looking at Percentages with Year 8 providing a great connection between popular culture and maths.

Tell me about maths…

In the first lesson with each of my classes, I gave them a chance to let me know how they felt about maths.  I hope this conveyed to my students that I am interested in what they like about maths and what they find difficult, it also gives me a basis for creating activities and future reflection to see what we’ve achieved.

It’s been two terms since my last post on this blog, End of term activities.  So, as I return to this blog at the end of the year, here are some more “last day” type activities.

For the last day of term, lessons may not follow a normal program, however they can still be engaging and mathematics related.

An outdoors activity is always a welcome change to a maths lesson.  To introduce rates, I take the class outdoors to measure their heart rate.

Many teachers use Microsoft Word to create worksheets.  It’s not designed for the job, there are better options but Word is the easiest to learn and has the greatest compatibility – making it easy to share documents.  One of the problems I see is that many people don’t know how to insert symbols into their document.  For example, x (the letter) is not a good substitue for × (the multiplication symbol).  This post shows you how to insert symbols like ×, ÷ and π quickly, on most computers (a Windows PC running Microsoft office).